By Jeremy Nichols
Don’t misunderstand this: what happened in Uptown this week was extremely traumatic for an already traumatized people!

For years, I’ve known people who have been living under the viaducts or in uninhabitable places in Uptown. During this past week, squads of city workers and police flooded the 2 viaducts and forced them away from their community. An overabundance of authority figures forced them to move 5 times! They were threatened with tickets and arrest! They were threatened that what little they possessed would be thrown away. The sight was intimidating because all the police stood there in their uniforms, with their weapons and bulletproof vests. This is traumatizing! This is incredibly traumatizing to people who have already faced copious amounts of trauma in their lives! 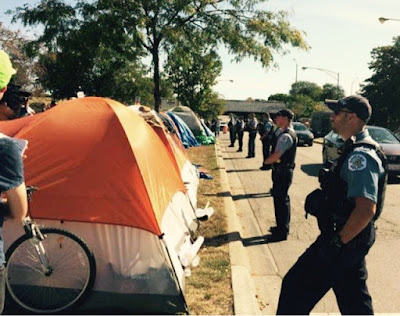 The folks who lived in Tent City found community together. They supported one another! They lifted each other up! They fed each other. They encouraged each other! As in any community, fights and power-plays happened, but for most people living in Uptown Tent City, it helped them feel safer and more empowered to move forward. Living in Tent City, living in a community where they had the same goal of moving from homeless to housing, it actually helped reduce the trauma of an already traumatized people!

Now my friends are scattered throughout this city. Now they struggle to find food. Now they can’t put up a tent without being criminalized. Now they have a greater fear of being victims of hate crimes. With the approaching winter, now they fear frostbite and hypothermia. Being alone and dying alone is now a scary reality. Now they fear not being found by their outreach worker if their name comes up for housing. Now they fear being invisible and ignored in this overly populated city! Now the insecurity and anxiety of what tomorrow brings have increased.

As I bump into my wandering friends who used to live in tents under Lake Shore Drive, there’s no doubt in my mind that the militaristic actions of this city increased their trauma. Their fear, confusion, and anger have increased. Their trust has decreased. This is especially poignant and sad when the city promotes and focuses on the need for “trauma-informed-care”. As I emphasized in my recent post about housing discrimination, this city is full of leaders who say one thing, yet do the exact opposite! You cannot promote “trauma-informed-care” while sending the armed police force out to try and toss people’s stuff away while trying to shove them into another neighborhood. 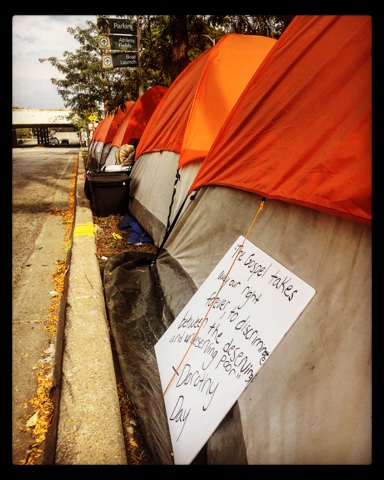 Even though we’ve seen plenty of “trauma-inducing-practices” by the powers-that-be, we have the freedom, power, and ability to live out “trauma-informed-care” to those who are ostracized. It also happened during this past week! A grassroots movement of people rallied together and helped soften the traumatic blows. Many gathered and showered our friends with gutsy acts of love and kindness. Some drove trucks, some moved tents, some brought food, some stayed up all night, some offered advice, some took people in, some gave hugs, some listened and so many poured what they could into an overwhelmingly stressful and traumatic situation!

Jesus calls us to be like Him, and when we imitate Him and love like Him; hope rises, compassion triumphs and trauma loses its power!