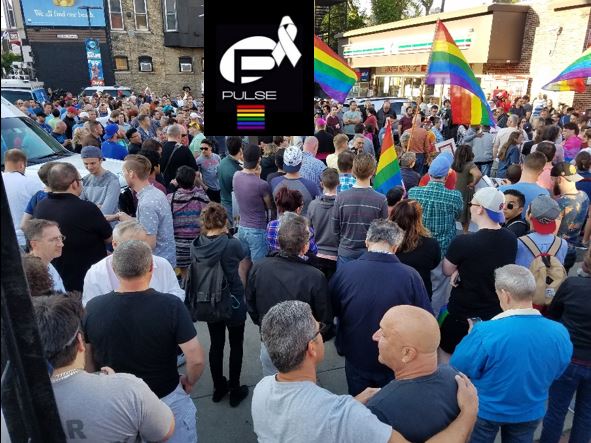 Please join our “Chicago 4 Orlando Against ALL Hate”group in this year’s Pride Parade. Here’s where to join us:
11 AM Sharp – Sunday, June 26
In front of the Uptown Target, 4466 N. Broadway
Two the 1 million+ people watching the parade, help us send a strong message of:
* NO to anti-LGBTQ hate!
* NO to anti-Muslim hate!
* NO to anti-immigrant hate!
* NO to the wars, drone bombs & support of dictators that breed terrorism!
As a community which was recently suffered a hate crime, we have an obligation to make sure that the tragedy of the attack on the Pulse nightclub in Orlando is not compounded by even more hate and violence.
1. Many politicians deny the obvious fact that the attack was motivated by anti-LGBTQ hate, so as to cover for their own hatred of our community.  They claim sympathy with the victims of the massacre at Pulse, but ALSO have spent recent months pushing the wave of anti-Trans “bathroom bills” and anti-LGBTQ “religious liberty” bills sweeping the country.
2.  Many bigots are using the excuse of the attacks on our LGBTQ community to justify increased racist attacks on Muslims and immigrants.  This has only augmented the toxic atmosphere for these groups, and several Chicago area mosques have reported multiple threats of violence just within the past few days. These racist attacks are particularly despicable given that many of those slaughtered at the Pulse were not only LGBTQ, but immigrants and/or Latinos/as as well.

3.  While politicians from both parties say they are concerned about terrorism, they have spent billions in taxpayer money supporting the very policies that have given rise to it.  We are now reaping the fruits of more than a half century of Western domination of the Middle East and South Asia.

U.S. invasions, drone bombings and support for brutal occupations and dictators have caused a series of “failed states” with the chaos and violence forcing one of the largest mass migrations in human history. Some of these migrants are subjected to additional humiliation when they seek safety within the same United States that has made their homelands virtually uninhabitable!

If we in Chicago were being bombed by drones from a foreign power, killing our loved ones and destroying our city, who is to say that none of our 2.7 million people wouldn’t respond with violence against innocents of that other nation?
While many have responded to the Orlando tragedy with calls for gun control, little has been said about the U.S. being by far the biggest weapons exporter and spending almost as much on its military as the rest of the world combined. Until the United States ceases its forceful domination of other nations of the world, the cycle of violence will only continue.
Please send these messages by joining our
“Chicago 4 Orlando Against ALL Hate”
group in this year’s Pride Parade.
Meet at our representatives at 11 AM SHARP, Sunday, June 26in front of the Uptown “Target” Store, 4466 N. Broadway (1 block south of the “Wilson” stop on the Red Line).  They will then lead you to the site where our group will start the parade.
We will have a march contingent in the parade, with signs and banners (bring your own too, if you would like!). We will have plenty of water for our group, but if you cannot walk the entire parade route, we encourage you to join us at the start, and then drop out when you need to.