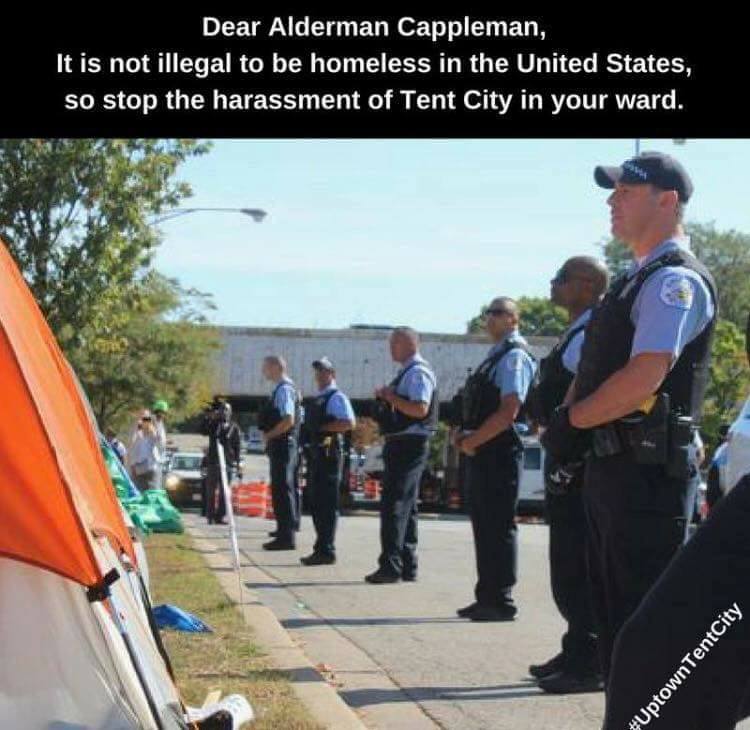 In recent weeks City leaders have dramatically escalated their ongoing battle against Chicago’s homeless population, repeatedly evicting Uptown’s Tent City — the most visible symbol of the city’s failure to house its own residents.

The evictions are an attempt to set new precedents in guaranteeing even fewer rights to those who already have the least in our city.

The goal of guaranteeing profits for the real estate industry has long dominated decision-making in city politics. It determines City Hall policies towards the homeless, the near-homeless, and housing for all the other residents who also do the work that makes Chicago work.

However, lack of affordable housing and homelessness cannot be properly understood if viewed in isolation from other issues. Policies on policing, race, jobs, education, transportation and healthcare are all inextricably linked to housing policies. Homelessness is but one of the more brutal aspects of an ongoing war vs. the non-wealthy by those who run our city.

Join long-time activist Andy Thayer of Uptown Tent City Organizers and the Gay Liberation Network as he examines how homelessness relates to other issues, why homelessness is a human-manufactured crisis, and what we can do to solve it.

Sponsored by Open University of the Left
Info:  http://openuniversityoftheleft.com

All Open University of the Left event are free of charge and open to all.

All prior video programs are viewable on our YouTube channel.
https://www.youtube.com/user/OpenUnivoftheLeft