The right and some on the left have derided the large post-election protests against Trump’s election. What both sets of critiques share is a failure to listen to any of the protesters, except through the media filters that they in other circumstances frequently deride as inaccurate.

The right said, “You lost, stop whining, suck it up,” and in yet another Trumpian flight of fancy said that the demonstrators were paid to be there. Some older leftists mimicked this by wrongly assuming that the huge crowds of protesters were mainly disappointed Clinton supporters, and so stayed away.

To say that these fact-deprived observations from afar are incorrect is an understatement. At Chicago’s night after election protest, there was a sea of homemade signs in the 10,000-strong crowd, with nary a rightwards pointing “H” arrow or other symbol of affinity to Clinton. 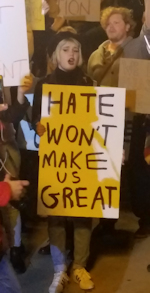 At an impromptu speak out in the streets shortly before we took Lake Shore Drive, two 15-year-old girls said, with disgust in their voices, “This isn’t about Clinton!” They and other protesters spoke in raw emotion in anger against a country which had just put an overtly racist, misogynist, Klan-endorsed sociopath in the White House. As one sign put it, “The voices of our abusers are now the president.”

The protesters I met were worried about yet more mass deportations, more physical attacks on and discrimination against Muslims, Arabs, blacks, LGBTQs, and more attacks on the right of women to control their own bodies for abortion and against sexual assaults.

They held little, if any, affection for the Democratic Party and Clinton. Many introduced themselves as or held signs indicating they were undocumented youth. They knew of the 2 million+ deported by Obama because some of them personally knew the families broken up by same. They knew the litany of names of black victims of police violence under our Democratic Party mayor (even if they didn’t know he was a Hillary delegate).

The median age of the demonstration was probably early 20s, with probably 90% of the thousands under 25 years old. Precisely a key demographic that Clintonites lamented for months that they’d been unable to reach, despite baiting about “Bernie Bros,” guilt tripping about casting a “feminist” vote for Clinton despite misogynist Gulf State monarchies giving millions to her Foundation, etc.

To those who say, why didn’t they protest before the election? I can say that many thousands of youth, many of them too young to vote, did just that. In Chicago last March, many thousands, primarily youth of color, outnumbered Trump supporters at the University of Illinois Forum, effectively shutting down the Trump rally scheduled for there. Again, no Hillary signs in evidence, and yes, a number of Bernie signs, but the core and overwhelming majority of the protest were youth of color not connected to any campaign.