On June 24, 2017, a small group of individuals were asked to leave Chicago Dyke March for expressing Zionist views that go directly against the march’s anti-racist core values. In the days following, articles have appeared in a number of major news outlets that put forward false reports based on testimony that is purposefully misleading. We wish to clarify the circumstances under which organizers and community members alike asked the group to leave. 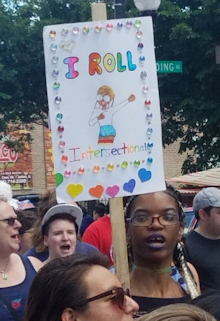 The group in question was heard disrupting chants, replacing the word “Palestine” with “everywhere,” saying: “From everywhere to Mexico, border walls have got to go.” One of the individuals, Laurel Grauer, is the Regional Director of A Wider Bridge, an organization with ties to the Israeli government that was protested for pinkwashing at the Creating Change Conference in Chicago in 2016. It was later revealed that Laurel was aware of Dyke March’s anti-Zionist position from pro-Palestine memes and art that were posted on the Dyke March page, and was also aware of the fact that her flag could be interpreted as being at odds with that position. The night before, she contacted an organizer to ask if her flag would “be protested.” The organizer told her the flag was welcome, but reminded her that the space is one that supports Palestinian rights.

Upon arrival at the rally location in Piotrowski Park, Palestinian marchers approached those carrying the flags to learn more about their intentions, due to its similarity to the Israeli flag and the flag’s long history of use in Pinkwashing efforts. During the conversation, the individuals asserted their Zionist stance and support for Israel. At this point, Jewish allies and Dyke March organizers stepped in to help explain why Zionism was unacceptable at the march. There was an earnest attempt at engagement with these marchers, and the decision to ask them to leave was not made abruptly nor arbitrarily. Throughout a two-hour conversation, the individuals were told that the march was explicitly anti-Zionist, and that if they were not okay with that, they should leave.

Zionism is an inherently white-supremacist ideology. It is based on the premise that Jewish people have a God-given entitlement to the lands of historic Palestine and the surrounding areas. This ideology has been used to justify dozens of laws that discriminate against Palestinian citizens of Israel, segregated road systems in the West Bank, and forced removal of Palestinian families from their homes in order to make way for Jewish-only housing, among other violent and discriminatory practices. We recognize that Zionism is not synonymous with Judaism, but instead represents an ideology that uses legacies of Jewish struggle to justify violence.

Chicago Dyke March Collective is a grassroots mobilization and celebration of dyke, queer, bisexual, and transgender resilience. Our priority is to ensure a safer space for those who are most marginalized. We welcome and include people of all identities, but not all ideologies. We believe in creating a space free from oppression, and that involves rejecting racist ideologies that support state violence. We welcome the support we have received from Jewish allies and marchers who are as invested in liberation as we are.

The threats that have been made to Chicago Dyke March and its organizers by Zionists worldwide does not even compare to the violence that Palestinians endure on a daily basis while living under Israeli military rule in the name of Zionism. Palestine is being occupied by Israeli military forces, and at the time of writing, Gaza is currently being bombed. This is what we as a collective are most concerned with. Palestinians deserve to live free from violence, and Dyke March will continue to fight for Palestinians alongside all other oppressed communities around the world.

Statement from Jewish Voice for Peace

As a Jewish organization dedicated to justice for Palestinians and opposition to all forms of bigotry, including antisemitism, Jewish Voice for Peace-Chicago affirms our support for the Chicago Dyke March Collective, a powerful force for justice and queer and trans liberation in our city. While we also hear those who are concerned at the perception that Jewish participants were singled out at the march, we ask that everyone reflect on how events actually unfolded, how Israel has appropriated Jewish identity and symbols, and how that impacts our movement spaces.

On Saturday at the Chicago Dyke March, a small number of members and staff of A Wider Bridge challenged the inclusion of Palestinian human rights as an issue supported by Chicago Dyke March. A Wider Bridge has the explicit purpose of “building a movement of pro-Israel LGBTQ people and allies.” “Pro-Israel,” for a Wider Bridge, has included organizing war rallies cheering on the Israeli military during the massacre of civilians in Gaza in August 2014 and partnering with Israeli consulates in the U.S. in organizing pinkwashing propaganda tours.

The A Wider Bridge contingent loudly encouraged fellow participants to erase mentions of Palestine during solidarity chants. When Palestinian attendees approached them, they became hostile while expressing explicit support for Zionism, which was one of the ideologies that march organizers had disavowed because it has led to decades of displacement and violence against Palestinians. After a two hour conversation with organizers and other members, the attendees were asked to leave for not respecting the community norms, including opposition to all forms of racism and violence. One of the people asked to leave was Laurel Grauer, Midwest Manager from A Wider Bridge ( AWB ), who held a rainbow flag with a blue Star of David identical in color, size and placement to the one on the Israeli flag.

Many other Jews, including members of Jewish Voice for Peace-Chicago, were present at Dyke March wearing Jewish symbols, including Stars of David, t-shirts with Hebrew, kippot, and sashes with Yiddish script, and none of them were asked to leave the event, interrogated about their politics, or were the target of any complaints because of their visible Jewish presence.

While for many this incident may have evoked fears engrained in our collective memory of instances in which Jews have been singled out, we believe this incident is a sad reminder of the destructive impact of the State of Israel’s appropriation of Jewish symbols and identity.

As Jewish Voice for Peace-Chicago, we share the Chicago Dyke March Collective’s opposition to state violence, anti-Muslim, anti-Arab, anti-Black, anti-immigrant, anti-queer and trans, anti-woman and anti-Person of Color bigotry. As a Jewish organization committed to justice and equality for Palestinians, we invite everybody to work with us in opposing the State of Israel’s use of Jewish identity, trauma and symbols in its oppression of Palestinians.

The Windy City Times’ journalism of last weekend’s incident was sloppy at best, dangerous at worst. Overall, it was very disappointing as regular readers. 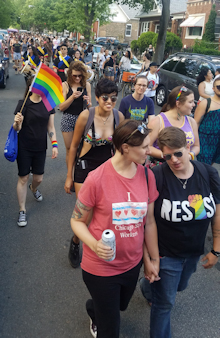 ntroversy began with a rushed piece byWCT lacking in detail of the events that unfolded.

We need to address what was initially left out: Both before and after Saturday, CDM has received death and rape threats.

The WCT left out that those with the flags were known figures from Zionist organizations connected to hate groups profiled by the Southern Poverty Law Center. They left out that these individuals went to the event with full knowledge of the march’s mission and acknowledged they anticipated it’d be a “politically fraught atmosphere.”

The WCT left out that these individuals interrupted pro-Palestinian chants. They left out that mostly Jewish activists tried to have a dialogue with the flag wavers for literally two hours before asking them to leave. They left out that many other attendees wore Jewish symbols and imagery and have been doing so for years at the CDM with nothing but acceptance and affirmation. They left out the history of dishonesty by one of these flag bearers, once known for making false accusations at the 2016 Creating Change Conference.

What did get reported though? Jews were banned from a Chicago Pride event.

CDM organizers have been enduring increasing numbers death threats, which illustrates how this kind of journalism is irresponsible. It is a calamity compared to WCT’s decades of coverage of LGBTQIA+ issues.

CDM released a statement alongside other solidarity letters from groups like For the People’s Artists Collective and Jewish Voice for Peace.

The lack of editorial procedures at Windy City Times to prevent such slanderous accounts is quite disturbing, and the Dyke March Collective is owed an apology by all concerned.