A central theme of Martin Luther King, Jr.’s life was his struggle against violence — violence abroad as epitomized by the Vietnam War, and at home in the physical and economic violence against African Americans.

Chicago’s mayoral race takes place against a backdrop of protests against police violence against unarmed black people. In an earlier article, the Gay Liberation Network’s Andy Thayer looked at how the three major mayoral candidates’ promises to hire more cops fail to adequately address this issue. In this follow article he outlines,

Part 2 of “Do We Really Need More Cops?”

In my previous article, I discussed the absurdity of all of Chicago’s mayoral candidates calling for more police, in a city that arguably has the highest number of metropolitan police per capita of any city in the nation. I also discussed how many community activists get it wrong in their proscriptions for how we can stop civilian-on-civilian violence, and violence of police versus civilians.

Today, I discuss how the evidence shows we can best reduce all kinds of violence in our city, and what the mayoral candidates who are challenging Rahm “1%” Emanuel, should be promising the voters.

There are two causes of human violence that probably trump all other factors – poverty, and a related, but not identical cause -economic inequality. While even some left-wing writers dismiss economics as having any relation to violence, it doesn’t take a rocket scientist to see that the five most violent American cities (as measured by murder rate) with populations of at least 250,000 people – #1 Detroit, #2 New Orleans, #3 St. Louis, #4 Baltimore, and #5 Newark – are marked by stark impoverishment and inequality.

An unbiased look overseas shows a striking correlation between economic inequality and murder rates. While reporting agencies both here and abroad are notorious for fudging both poverty and crime statistics, the so-called “Gini Coefficient,” is internationally recognized as the best indicator of inequality.

A United Nations’ calculation of the Gini Coefficient compares countries with the largest difference between their wealthiest 10% by income to their poorest 10%. It puts Honduras, with the world’s worst murder rate since a 2009 U.S.-supported coup, as the sixth worst for inequality out of 126 countries listed. The World Bank’s listing of 156 countries by Gini co-efficient puts Honduras as eighth worst.

Below is map rendering of Gini Coefficients based upon the 2009 CIA Factbook, and below that is a 2008 map of world murder rates. 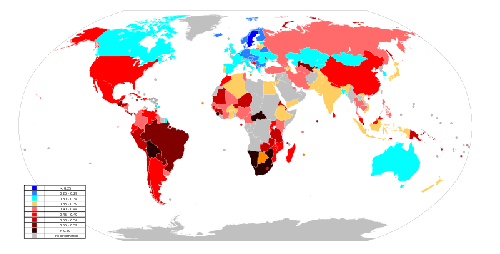 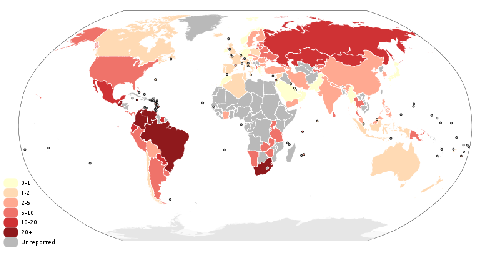 It’s striking how many countries with poor Gini Coefficients – Brazil, Guatemala and South Africa for example – also have some of the worst murder rates. It’s also striking how a country that’s culturally similar to the United States – Canada – scores much better than the U.S. in both regards. No doubt Gini Coefficient scores comparing the U.S. as a whole to cities like Detroit or New Orleans, or comparing communities like Wilmette to Chicago’s Englewood or K-Town neighborhoods, would also go a long way to explaining their different rates of violence.

Unfortunately, as the maps below show, Chicago’s mayor Rahm Emmanuel, his predecessor Richard Daley, and their corporate buddies have already done much to send Chicago in the wrong direction. 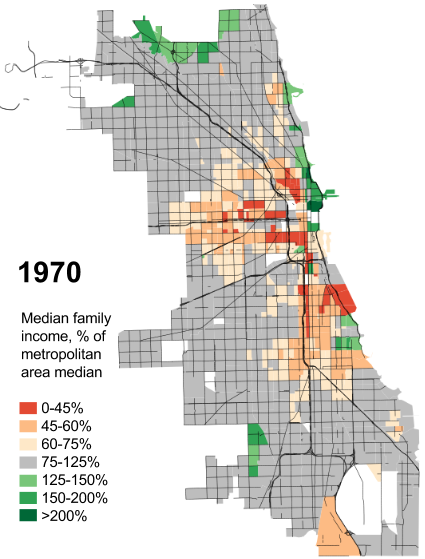 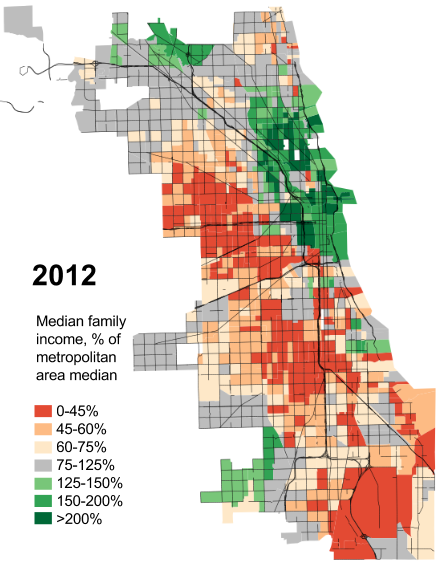 What to Do With This Information

First, throw out the prescriptions offered by Mayor Emanuel and his leading challengers, Jesus “Chuy” Garcia and Bob Fioretti.

In a city already swimming in red ink, with prospects of even worse to come, wasting more money on an already bloated police force is worse than useless – it’s robbing money from programs that actually work.

We live in a city with record high youth unemployment, which in turn feeds petty crime, which in turn feeds the prison-unemployment-prison spiral downwards. The legacy of the Great Recession and much of what animated the Occupy Movement were that 40- and 30-somethings traded down to jobs normally taken by recent college graduates, and college graduates took jobs previously taken by secondary school graduates or those still in school.Screwed most by this were black youth, followed by Latino youth – racism which is not only repugnant in its own right, but which bodes poorly for our majority-minority city.

So first on the agenda to redress our Gini Coefficient/inequality problem should be massive investment by all levels of government to provide jobs and vocational training to youth. Germany, with one of the lowest violence rates in the world, is renowned for having world-leading vocational training programs for youth. In addition, a University of Chicago Crime Lab study published in the journal Science showed that participants in a Chicago youth summer jobs program “had 43 percent fewer violent-crime arrests over 16 months, compared to students in a control group,” reported Washington Postcolumnist Emily Badger.

Second, funding for in-school and after-school programs and student-teacher ratios should be on the same scale as those found in Rahm’s home town of Wilmette. Such measures would have the added benefit of increasing socially-useful employment opportunities for working class Chicagoans.

Third, the decades-long destruction of public housing, SROs and other low income housing must be dramatically reversed. While sons and daughters of upper middle class families can get by living in Mom and Dad’s basement, the income crash for working class youth and young adults over the past decade has led to doubling up in housing. Historically, immobility in housing choices has led to increases in domestic violence and other social ills.

Finally, TIF funds should either be entirely wound up and given to the aforementioned programs, or spent on genuinely alleviating poverty rather than subsidizing wealthy mayoral friends. Emanuel’s and Daley’s spending of such “poverty funds” on such outrageous items as $5.2 million in tax dollars for a hotel for the Pritzker family’s Hyatt chain in Hyde Park, $55 million in tax dollars for a DePaul University basketball arena near McCormick (when the United Center offered its facilities rent-free), and $15 million in tax dollars for the rehab of the Chicago Board of Trade building for the dirt-poor Chicago Mercantile Exchange, are all moves calculated to send Chicago’s Gini Inequality Coefficient spinning wildly in the wrong direction.

Levels of police violence track closely to inequality and violence as a whole in a society. Brazil for example, with a much worse Gini Coefficient than the U.S., is infamous for its police mowing down of youth.

This fall and early winter has seen a spate of protests against police violence, here in Chicago and around the nation.

All of Chicago’s front-running mayoral candidates, to their shame, have barely addressed the issue of Chicago police violence and racial discrimination. This is a disgrace in a city with as lurid a history of police racism, violence and prosecutorial misconduct as Chicago’s. It is a proverbial turning of the backs upon our city’s youth, particularly its black and Latino youth.